Should The Viaduct Trees Be Saved? 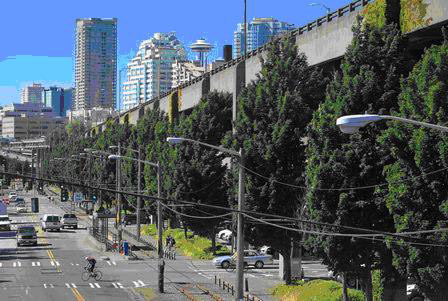 By Larry Lange
Special To SEATTLEPI.COM

The Alaskan Way Viaduct is buffered by trees in this photo taken Tuesday. An effort is under way to preserve the trees when the structure is torn down and replaced by a tunnel.

If the Alaskan Way Viaduct is torn down and replaced by a tunnel, at least one public official thinks the trees alongside the viaduct ought to be left standing near the central waterfront.

The city has a policy of trying to preserve its steadily disappearing canopy of trees and City Councilman Nick Licata thinks the viaduct trees shouldn’t be any exception, even if they’re around construction work. He’s exploring the possibility with the city’s forestry commission, a recent entity created to consider how to preserve the city’s disappearing tree canopy.

“I don’t see why not,” he said of his idea. “If you put in a new viaduct you probably couldn’t save them but if you’re tearing one down (as planned), I don’t see a problem,” Licata said.

The city estimates there may be as many as 200 trees adjacent to the viaduct between Holgate Street and the Battery Street Tunnel, including a number of scarlet maples near Madison Street.

About 75 trees to the south, however, will be displaced by construction of a new highway segment between South King and Holgate streets, nearly half the trees in that project area. The state has not decided how many trees to take out north of King Street near the waterfront.

Department of Transportation spokeswoman KaDeena Lenz said the state will plant two trees for each one cut down, though not necessarily in the original locations, in order to meet a city requirement.

According to a list Licata has developed, two different types of trees parallel the viaduct: London Planes south of Jackson Street and maples north of Jackson and west of the viaduct. Trees to be removed south of King Street include 25 London Planes, he said, and “it is probably too late” to save them because the south-end viaduct work has begun.

“My concern is primarily with regards to saving the maples,” which he said measure about 40 feet high, a foot in diameter and located between four and 10 feet from the viaduct columns near the waterfront. Licata said about 30 columnar maples are expected to be removed when the viaduct is demolished, in 2013 or 2014, though a state spokeswoman said the number hasn’t been determined.

Licata said his tree-preservation idea occurred to him after a discussion with his wife about tree planting in general.

“She said, ‘what about the waterfront trees?’ ” Licata said, and when he went to take a reminding look he was surprised at their numbers.

“I’ll bet you’ll be shocked at how many trees are down there, and how you never thought about how many there are,” he said. Because of its location near a busy, noisy highway, “it’s probably the largest and most invisible grove of trees in Seattle.”

With viaduct discussion focused on replacing the highway, “It’s a classic case of focusing on one thing and missing the forest,” Licata said. He thinks the central waterfront trees should be preserved for aesthetic and environmental reasons.

State officials have discussed tree removal from the viaduct segment to the north, between King and the Battery Street Tunnel, but “I just don’t think we have as much information as far as the number and species,” Lenz said.

She said the state would need to determine if any downtown trees are in the path of the viaduct demolition or the reconstruction of surface street Alaskan Way on the waterfront. Asked if any trees might be left, Lenz said, “I don’t know if that’s possible.”

She said the updated environmental impact statement for replacing the waterfront segment of the viaduct won’t discuss tree removal or replacement because the project design won’t be more than 10 percent complete when the document is written and “it is not possible to know the number and type of trees impacted” at that point.

“The jury will be out on that. Nobody has approached us as far as I know,” said city arborist Nolan Rundquist.

Licata said he wouldn’t be satisfied with planting new young trees to replace mature ones. “They’d be basically planting sticks to replace these full-grown trees,” he said. He hopes to call enough attention to the issue to persuade the state and city transportation departments to preserve a line of trees near the waterfront, making them part of any new waterfront park that replaces the viaduct.

Rundquist said that the trees have done well near the viaduct and are “pretty happy. Some are getting tall enough that they’re peeking up over the (top level) of the viaduct. We’ve had to prune them back a little bit in order for (the state) to do their inspections.”

He said it’s possible to temporarily remove trees during construction, then re-plant them once the work is finished. It’s been done at several developments, including one Regrade condo project where another maple was lifted out, stored for a year and then replanted when the building was done.

But it won’t be that simple around the viaduct, where the trees are close to heavy traffic or underground utilities. Licata guesses it would be “much too expensive” to uproot and store the trees: “They’re huge.” Rundquist wouldn’t hazard an estimate of the cost.

There are “too many wild cards to speculate,” Rundquist said. “I don’t want to be out there with a shovel and go through a four-inch gas line.”