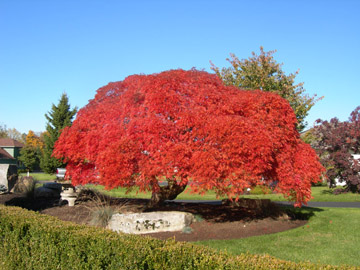 Several Japanese maples and rhododendrons stood in the planting bed at Century Link Field, exactly in the location planned for the pre-game concert stage. Due to Big Trees Inc.’s long experience in tree transplanting, the company was asked to come and remove the trees in root balls before the stage construction began.

The trees were put in root balls and transported by Big Trees Inc. expert tree movers. At the nursery, they were then placed into a storage bed and kept watered. Subsequently, the stage construction proceeded to completion, and the live pre-game concert was held—both kicking off the 2014 NFL season, and recognizing Seattle Seahawks’ achievement as reigning Super Bowl champions. Once the festivities were complete and the stage was taken down, Big Trees Inc. again put the stored trees into root balls and returned them to their planting bed, reinstalling them in their original positions.

“We were glad to play our role in this Seattle-wide celebration, and preserve the beautiful trees of Century Link Field in the bargain, so they could be put back in their original place after the ceremony!” says Nancy Penrose, owner of Big Trees, Inc. “GO HAWKS!”

Nancy Penrose is the owner of Big Trees Inc. (https://bigtreesupply.com), located in Snohomish, WA, in the Seattle area. The company is one of the largest tree nurseries in the Seattle area with over 120,000 trees available in over 300 varieties. They not only can deliver young trees but also mature trees in a wide range of sizes. Some types of trees available include spring flowering, deciduous, evergreen, and privacy trees. The company also does tree transplanting including large trees. Their blog can be seen at https://bigtreesupply.com/blog/